Archival research in writing studies involves the study of people and their histories through the artifacts that they leave behind. Much of the modern scholarship regarding this type of research revolves around the idea of memory and representation. For example, in her article  “‘Classbook Sense’: Genre and Girls’ School Yearbooks in the Early-Twentieth-Century American High School,” Amy Lueck says that American high school girls in early 1900s developed class books as they “came to doubt their powers of memory and increasingly seek material devices to supplement their own flawed remembrances” (Lueck 360). Kevin G. Smith also touches on this idea of memory in archives in his article regarding the Boston Marathon Bombing. He primarily points out the importance of public memory through “participatory archives” which are making use of “the possibilities for crowd-sourcing the collection of archival artifacts” (Smith 117).

The problem with the idea of memory being the center of archival studies that memory, and therefore the research that relies on it, lacks comprehensivity. Because of this, certain groups of people have dominated the collective memory, as discussed by Jacqueline Jones Royster and Jean C. Williams in “History in the Spaces Left: African American Presence and Narratives of Composition Studies.” In this article, the authors point out the fact that of the early histories written of composition studies, “none…can be described as comprehensive, definitive, or all inclusive” (Royster 564). Therefore, the argue that archival research should not strive for comprehensivity, or knowing everything about every group if people, but rather create and fill an “ideological and/or cultural location” within history for those traditionally underrepresented. The importance of location continues in the essay “Changing Research Methods Changing History; A Reflection on Language, Location, and Archive,” in which Jessica Enoch looks at the different elements that play into archival research. She emphasizes the importance of physical location in archival studies, both on a broad scale, such as the country someone lives in, and the more local scale, such as the space where a writer physically sits to write a certain piece. She argues that understanding and visiting the places where a subject writes is invaluable: “the process of inhabiting their same spaces and places allow us to get ‘into closer touch’ with their words” (Enoch 54).

The idea of composing for memory and archival purposes, becoming a part of collective memory is definitely evident in my own writing process, particularly that of my personal writing process, rather than that of my academic. My personal writing centers around an online blog that I write, which reflects the experiences I have as a university student in this time and context. Similar to the yearbooks in the study by Lueck, I originally started writing this blog for my own personal memory about experiences I had

and how I felt about them; however, because of the context and the ambiguity of my writings, which made them relatable to my peers who now read them, my blog posts have become a valuable part of the collective memory. What I recently noticed about my blog is that, despite my belief that it is representative of people my age and our culture, I don’t “permit [my] own group identity or the politics of location to have visibility or consequence inside [my] narratives” (Royster 565), as don’t many dominant histories and cultural representations. I give my age and my identity as a college student, but I don’t ever outwardly identify myself as middle-class, white, straight, female, Catholic student, even though all of these things clearly affect my writing and the way that I see the world. I wonder how much of my identity someone would identify correctly by looking at my blog through an archival lens.

My blog and the other artifacts of my writing also function similarly to the memory devices recognized by Lueck, as all of my texts are “part of the same cultural and material moment and shape one another in symbolic and material ways” (Lueck 367). For example, many of my blog posts and journal entries didn’t start out as writing to be shared, but rather they were personal and inspired by another piece of my writing process, which is a notebook filled with a collection of quotes, written in colorful ink, from my favorite books and authors.

This book serves as an inspiration for my writing and my life, and I worked to make it neat and pleasing to my organized eye. However, if people were to study my blog and my writing artifacts, they might never understand the true importance of this book; these quotes are essential to my writing process and they often appear, either directly or simply through concepts, in my completed writings and blog posts. The book also gives insight into the books that are popular among people my age, and places me as a representative of a certain group of student readers. However, in documenting the quotes, I leave out details that I feel are obvious, because I was the only intended audience. For example, write the author or titles of the books that the quotes come from, but I never once state the fact that they are actually books! Someone looking at this notebook may wonder where I found all of these words and why I felt the need to put them all in one place. Therefore, my bookshelf, which houses most of the books that I used to fill the above notebook, also becomes an important artifact in my writing process, as it not only contributes inspiration to my process, but is also a part of my setting and location, as it holds a prominent position in my bedroom, next to my desk, easily accessible when I am in the middle of a writing process.

Another artifact that is essential to my writing is this small notebook. I started writing in it about two years ago, and it carries a lot of my life-story since then. A person looking in from the outside, might see not only the pink, polka-dotted cover, pleasing to my personally girly style, but also the small coffee-stains along the right edge and the fraying top-right corner, which was chewed up by my dog. Although, it says journal on the front, I really hate to call it that, because it seems to suggest, at least in the no-feelings-allowed, tough love society that we live in, that what is inside is not of value to the scholarly world and is simply the thoughts of a dramatic teen. 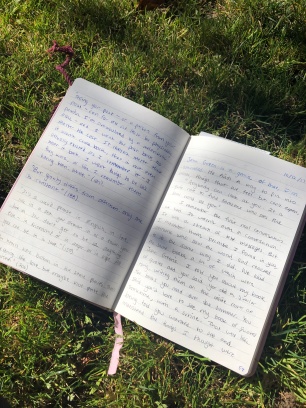 I find this aversion to the word journal somewhat ironic though, because if someone were to find this they would probably simply call it my “journal,” because the word itself is written on the cover! However, this notebook is much more than that, because it carries valuable information not just about who I am, but the world that I live in and the culture of a college student in this era. And I also organize it as a somewhat scholarly piece, dating each new entry, and numbering all the pages, so that I can make reference to other entries I wrote using a page number, almost in MLA in-text citation format. This would make my life, for the time period of this book, somewhat easy to follow chronologically. I also think that the layout of the notebook is indicative of who I am, as an organized person, and of the level of schooling I have had, and the way I was taught to write, synthesizing individual texts as a pieces of a larger arguments and in reference to outside sources. I would be interested to see how an artifact like this would be interpreted by someone looking in from the outside, because it was written for my purposes only, containing only rough drafts and ideas for future blog articles as well as simply personal writing. The writing about my feelings and memories from my days, are very detail oriented when it comes to describing the actions and settings of events. This attention to detail leaves much open to misinterpretation, for someone might find my attention to detail overwhelming and categorize it as some sort of fixation, particularly if they don’t understand this book to be a personal memory tool. Also problematic if the book is looked at outside of a personal memory lens, is that despite attention to detail, I leave out details that other people might find to be essential to my life story, like names, and I often use abbreviations that make sense to me, but might not to others. It would be interesting to see how someone else might develop a different story of my life by interpreting my ambiguity.

Quite a few of the entries in this journal (for lack of a better word) begin with me  describing where I am sitting and writing, as often the things that I wrote were a by-product of the experiences I had or the people I observed. As Jessica Enoch wrote, “attending to questions of location…can offer a fuller explanation of why” (Enoch 55). This idea is essential to understanding my process. 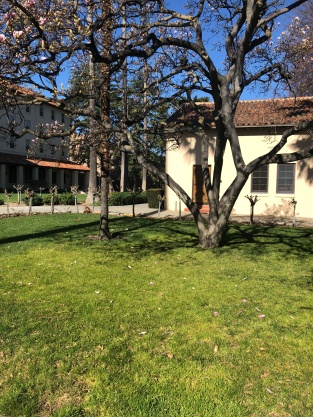 This artifact is a picture of my favorite place to sit and write in the mission garden on Santa Clara campus. Being outside is important to my writing process because the nature is great inspiration and also being in the open air, by myself frees me from other people’s judgement. I have also frequently developed an entire short story from watching and interpreting the interactions of the people I observe. This is interesting in an archival, public memory lens, because it creates a written representation of the behaviors and activities of people in my time and place. However, because of my lack of personal details, and that fact the stories I develop about these people are mostly fictional, they do not accurately speak from the memories of those around me. However, someone looking from the outside might not be able to distinguish the difference between the fictional, people-watching-based stories that I write in my notebook, and the real ones that are based on my actual experiences with people that I know well.

Overall, my writing process is an example of the memory and representation themes that dominate archival research. My blog, influenced by the books and notebooks that I leave behind, all originally written for personal memory, have become a part of the history of my time period and representative of a person of my discourse communities. However, because they were not originally written for this purpose, “the artifacts, the connections between them…are manifold, complex, and open to interpretation” (Smith 117).  The ambiguous blanks in my writing process, such as lack of names and lack of distinction between fiction and reality, could easily be filled in incorrectly by someone unable to discuss them directly with me. Therefore, my writing process, and its occasional lack of detail and purpose, illustrates the limitations of archival research, as we strive to fill in the blanks of histories and represent the memories of the many different kinds of people that have contributed to composition throughout history.